When I first heard the news that Games Workshop were planning on releasing a movie I was excited and sceptical in equal measures. I could still remember the promise that the Bloodquest movie held before it was ultimately and unceremoniously canned.

However, following the big announcement at GD UK '09, and the raft of details which followed after, it seemed that this time something would actually be produced.

When I saw that Dan Abnett (my favourite Black Library author) was attached to write the script and the quality and pedigree of the voice actor cast (including the likes of John Hurt, Terrence Stamp and Sean Pertwee), my excitement levels were on the rise and I was filled with hope that the incredible and rich 40k universe which GW has created over the last quarter of a century would be done justice in its official screen debut.

In the run up to the special edition DVD launch of the movie the creators, Codex Pictures, begun to release teaser trailers and screen captures from the movie. I have to admit, what I saw in these gave me some concerns - particularly the trailers. So by the time the DVD finally arrived (4 weeks late after a lot of delays which made the £8 for postage seem ludicrous), I was probably more nervous than excited.

Sadly I was right to be nervous. Pretty much from the off I was disappointed and I don't think this was entirely due to the movie not meeting my lofty expectations for a 40k movie.

I sat through the first 10 minutes hopeful that it would get better as it went on, but sadly it didn't, instead just crushing my optimism the longer I watched.

So why isn't this movie a good first foray into the glitz and glam of the movie world for 40k? Well, lets look at the basic elements of the movie...

The animation isn't terrible - but it's not exactly anything special either. The space marines just don't seem to be animated to convey any kind of size, power or weight - they skip along without any real weight shift taking place or much movement in the armour. The shoulder pads are also quite oddly shaped and curved and most scenes seem to lack any real detail. The backgrounds and environments in particular being very poor for the most part - it felt like I watched 40 minutes of marines walking in poorly animated fog, a cheap cop-out for rendering environments.

The lighting is also pretty poor on characters faces throughout, often having too strong contrasts between light and shade and ruining any sense of realism.

Yes, some of these seem like nit-picking points, but for a short movie that aims to convey the core elements of what a space marine is, it's pretty important.

There were a few decent points, such as the armour on John Hurt's character Chaplain Carnak and elements of the few fight scenes there are, but the negatives far out-weigh these few bright points.

The sounds of this movie were very noticeable throughout due to there almost complete absence. Be it speech, sound effects musical score or environmental sounds, there was very little given the movies length and the lack of any kind of noise was often quite jarring - detracting significantly from the viewing experience.

Whole scenes would go by without any speech, sound effects or accompanying background noises or music, making quite boring viewing.

On paper the voice acting cast looks amazing, sadly in the movie it seems like they either don't reach their full potential, or aren't given a chance to shine. The speech often seems emotionless and stilted with the exceptions of Sean Pertwee and Steve Waddington who are the few bright points in some otherwise uninspired voice acting.

I'm not sure of the constraints which were put upon the scripting/story for this movie due to length, budgets and marketing/IP usage, but it's hard to believe this script came from Dan Abnett.

I won't spoil any of the story for those of you who may still choose to watch this movie, but suffice to say it's bland and un-engaging throughout, leaving the viewer caring little for what happens.

As I said before, much of the movie is marines walking in fog with little dialogue - no bright points here I'm afraid. 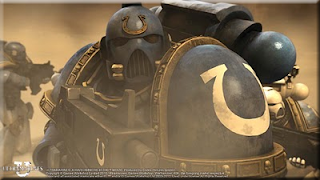 All in all a very disappointing first effort for Games Workshop on the movie front. For a universe and IP with so much promise, coupled with what is, on paper at least, a great cast and author, this movie falls so far short of expectations.

Even for a low budget, "hardcore" space marine movie, aiming to typify the character of space marines, as the makers have claimed was their aim, it's poor.

I wanted so much to love this film as I really want to see more efforts made to bring Warhammer and 40k to the screen, but it just feels like the makers have missed all of the subtleties that are essential in creating the character of space marines as they are frequently so well described in novels and army books.

Things like the weight, value and scale of power armour for example. There is one scene where the squad have to cross a rickety old wooden bridge - I actually cringed. Seriously. Mankind's superhuman elite, 7ft of power and genetically enhanced muscle, encased in what one can only imagine to be around 700 - 1,000kgs of ceramite power armour, crossing a bridge from a Scoobie-Doo cartoon.

They skip across unhindered and without so much as a creak.

And on that bombshell, good night and have a happy New Year!
Posted by CMDante at 14:48