Well, given that it was Halloween this past Monday, aside from carving pumpkins (seen above, mine is on the right), I thought it would be fitting to take a look through some of my long dead projects and see if anything could inspire me back into working on them.

Fitting the "resurrection of the dead" Halloween theme, I thought I would share some pictures of these withered "ghouls"! 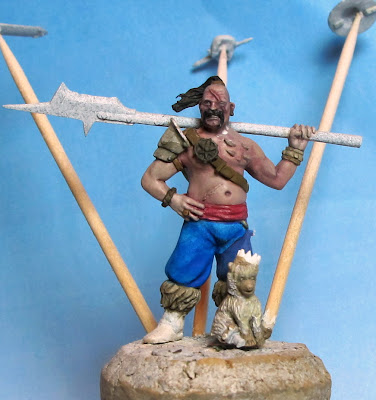 First up is the Kislev Boyar I had been working on in Summer 2010. An almost complete scratch sculpt, this was originally intended to be my main entry into the Warhammer Fantasy Single Miniature category at Golden Demon 2010.

Sadly, as it came time to get painting I begun to notice a lot of nagging flaws in my sculpt work which put me off ever finishing him. At the moment, he resides on my shelf of unfinished projects in the state currently seen above - a few roughed in base coats and a wash on the skin. In the end I opted to paint up a slightly converted Averland Captain as my entry for Golden Demon 2010 instead.

Next up, a "spooky" Genestealer Magus that I based on a Forgeworld Tau Air Caste figure and sculpted extensively over to get to the point you see him at now.

As you can see, I started to paint parts of him, but as this was done in early 2010, just before I moved to a new flat, he got sidelined and was never returned to. Looking at him now, I have no doubt I could have sculpted and painted what has been done much better now.


Vespero of the Vendetta

This figure was inspired by the Assassins Creed 2 computer game and my desire to create a more enigmatically posed version of Vespero - the old Dogs of War character.

I actually still quite like how much of this scratch build has come out, I've just never been able to find the concentrated inspiration to go back to it! 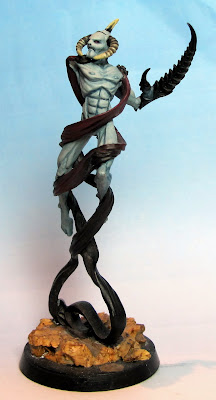 This one is really quite old now (2008?) and from back when I was just getting back into the hobby again after a few years away. The sculpt work on the head leaves a lot to be desired and, as you can probably see, is a little worse for ware now too.

I'm still quite fond of how the paint job on the flesh was turning out on this one though. Oh well!


I guess to sum this post up, I get a lot of ideas for projects. Typically quite elaborate and involving a reasonable amount of sculpting or conversion work. Usually being time poor for the hobby, it is quite common for a project to get to a particular stage before I begin to lose the inspiration and motivation required to complete it (much to the continued frustration of my beloved girlfriend!).

For each unfinished piece here, there are at least 2-3 times as many on my shelf - sad but true!

Anyway, I hope you have all enjoyed this little walk down an eerie memory lane! Feel free to share your thoughts in the comments.
Posted by CMDante at 13:57