Conflict Scotland 2010 was last Sunday and for the third straight year I was in attendance accompanied by my wonderful (and very supportive) girlfriend.

Taking place at Glasgow's Braehead arena (on a thawed out ice rink no less!), I have been to one good event (2008 - Jervis Johnson and Jez Goodwin in attendance) and one really poor one (2009 - No studio presence, terrible judging), so I wasn't sure what to expect this year.

Luckily, my fears for another poor year were unfounded as the organisers had taken on feedback from the previous year and greatly improved on what was on offer. This year's studio representatives were Giorgio Bassani and Graham McNeil, both of whom were surprisingly quiet for much of the day.

Seeing this was the case, I took the opportunity to pick Giorgio's brains on the art of miniature sculpting and he was kind enough to share some secrets about tools, techniques and materials for smoothing Green Stuff joins, but these will be discussed in future tutorials.

I also got to see some of Giorgio's trainee sculpts, all of which were fantastic (see the pics to truly understand what I mean!). Unfortunately he wasn't able to say whether or not any will be cast as there has been no mention of an intention to. 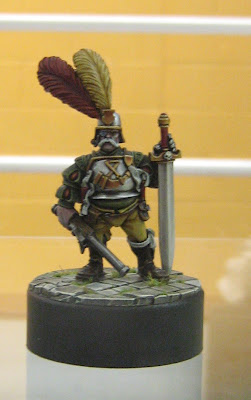 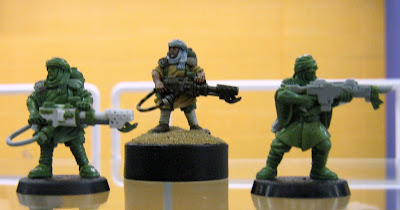 The other main thing that I noticed that was greatly improved on last year was the Golden Griffon painting contest, my main reason for attending.

The previous year there had only been a handful of categories and a pretty low number of entries. This year however, the categories were much closer to those of Golden Demon UK (Fantasy single, Fantasy monster/regiment, 40k single, 40k regiment/monster, LOTR single, LOTR monster/regiment, Diorama, Youngbloods and Brotherhood of the Brush).

The Brotherhood of the Brush was a new one and the only category staff could enter. The unique thing was that everyone had to paint the same figure - the beastman character Ghorros Warhoof. As this was the only category staff could enter, I was expecting a big turnout and some good quality entries, therefore I spent the week running up to the event painting up my entry. I was a little disappointed though to see there were only 4 entries including my own...

My other entries were in 40k single and Fantasy single with my cadian veteran and Blood Bowl Griff Oberwald respectively.

In the end, I managed to win all three categories I entered which I was very pleased about! Below are a few (pretty poor - sorry, need to take some new ones!) pics of my entries.

All in all, it was an enjoyable event and I think I will definitely return next year. It was also great to get to speak with a few other painters, albeit briefly!
Posted by CMDante at 20:23