As you may (or may not!) have noticed, I haven't been particularly active on the blogging front in the last few months - for that, I apologise.

With work, real life commitments and general hobby indecision, I haven't actually done a whole lot in modelling and painting terms in the interim either! Lots of small projects started and then shelved in quick succession for various reasons.

Fortunately, Games Day UK 2010 took place a couple of weeks ago and after promising myself for the last 3 years I would attend and finally enter a GD, myself and my incredibly supportive girlfriend made the trip down to Birmingham for a day of hobby filled activity (that and we were flying out to Singapore the day after from London - I suspect this was a major contributing factor in our attending!).

So with the day fast approaching and nothing new to take to it, I begun working on a Kislevite warrior on foot sculpt for the Fantasy Single Miniature category.

I spent about 3 weeks working on the sculpt (using ProCreate and a Fimo core, with a few GW parts), probably too long over too short a period in retrospect as, by the time it came to painting it, I had begun to notice a number of annoying flaws which totally destroyed my motivation, leading me to shelve the project.

Fortunately I had to hand an Empire Captain figure (the direct only one with the big mace) which caught my attention. A few small conversions and a freshly sculpted hat later and it was time to paint!

A lot of thought went towards colour schemes, basing, composition of "the piece" etc and I owe a lot to the fine folks at Darkwald for their thoughts and feedback. In the end I settled for an Averland scheme as it was iconic of the Empire, a striking scheme and allowed some creativity with the opulence of his attire and equipment.

The sculpt itself is actually one of my recent favourites. I've seen it heavily criticised by a number of people on forums, but I think they fail to see it's "classic GW" charm, coupled with the fine details and character of the pose and face.

I had always intended to use a 40mm base, even when considering the Kislevite, it simply offers more room to convey a scene with. However, the extra space can also look too much for such small figures so I had also always intended to include a companion figure - with the Kislevite this was going to be the small bear I had sculpted (pictured below). It added even more iconography and character so was an obvious choice. With the new piece however, there was no obvious choice for "companion" that was feasible in size (it is "Single Figure" after all!).

In the end I stumbled across the dog from the Bretonnian Men At Arms set. I had seen this used before in one of Joe Hills gold Fantasy Single entries from a few years back, so I was comfortable it was safe to use. However, the stock part on it's own didn't really work for me. It didn't look linked to the figure in anyway due to both it's pose and the lack of physical attachment (Joe's was on a leash). Therefore I altered the head (fixing the position of the eyes in the process) so that the dog would be looking to his master, a convenient trick which also helped draw the eye of the viewer towards the desired centrepiece of the figure - the captains face (see the early stage WIP pic below).

Managing to finish just 2 days before the event (though I had also intended to add a design to the shield freehand on the leg but ran out of time) I decided to take my Cadian Guardsman and Ghorros Warhoof (pics in previous post) to enter into 40K Single and Fantasy Monster respectively.

On the day I managed to make finalist with all three entries, even having my Fantasy Single Entry displayed on the big screens during the day for about 5-10 minutes! This made me very happy, but fortunately there was more in store!

Watching the judging for the Fantasy Single was both interesting, exciting and nerve wracking in equal measures. In the end, my entry was pushed into 4th (last one cut from top 3) by some very nice pieces. I was later told by one of the judges that it had been considered for Bronze but the fact the Gold and Silver winning pieces were both Empire figures also counted against it - somewhat disappointing, though I can understand why (people read too much into the "types" of figures which place the previous year when planning GD entries!) - in the end, I was just happy to have been in contention for a place in the busiest category (40 odd finalists compared to just 12 for 40k Single) on my first time entering! *Pics of my finished entry below care of www.sodemons.com - don't have my own yet! 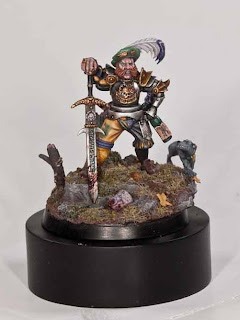 My feelings were then given a massive boost when, whilst hunting for my Ghorros Warhoof to collect from the finalist cabinets, I found I had won Bronze in Fantasy Monster with him - quite unexpected as this was also a highly contested category and mine was one of few "stock" entries.

There has been a lot of negative talk online after the event from a number of disgruntled parties over the judging, the way the event is run, what was on show etc, however I find myself disagreeing with almost all of it entirely.

Every year there are gripes that a particular painting style is "destined" to win where others are specifically singled out and prejudiced against - a quick look at the winning figures would suggest otherwise to me. This kind of hyper-competitive attitude saddens me to see, however I won't go further into it here.

All in all, I had a great day. I got to meet some great people whom I have spoken with online for some time and who's work I highly respect in person at last (Jakob Nielsen, Darren Latham, Mark Tait among others), got to see some cool studio stuff, got to see LOADS of great miniatures and best of all, achieved a childhood dream (sad I know) of claiming a Golden Demon!

More pics and posts soon I promise!
Posted by CMDante at 09:23