If you frequent any hobby forums (Warseer, Dakka Dakka etc), visit the GW website regularly/receive their newsletter/read White Dwarf, then you probably can't fail to have noticed all the talk about Games Workshop's new Citadel Finecast range.

If you are wondering what Finecast is, then to summarise, Games Workshop have decided to move away from casting character figures, monsters and elite units in white metal, instead opting for a new resin hybrid - the Citadel Finecast range.

In the first wave, there are around 120 Citadel Finecast kits, cast using the new resin. These include a range of the most popular figures previously cast in white metal for most armies, along with all the new character and elites/monster releases. The word is, all new models which would have previously been cast in metal will now be cast in the Finecast resin and the change will also sweep back through "most" of the existing miniatures still cast in metal.

What I've heard is that, as a metal figures stock expires, the decision will be looked at whether to cast it in the new resin, or just continue to cast it in metal, though I suspect resin to be more likely.

Anyway, with all the hype about today's big release of the Citadel Finecast range, I decided to pop down to Games Workshop Glasgow to have a look for myself and pick up a figure to experiment on. 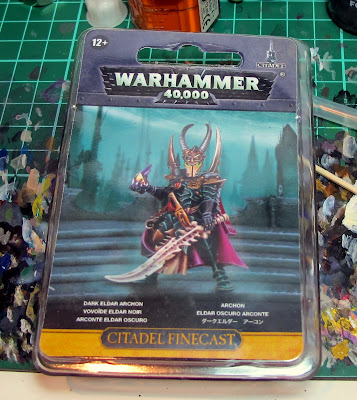 The fact that the new range is cast in resin excited me from the moment I first heard about it. As regular readers will probably already be aware, I hate working with metal miniatures. Resin offers excellent conversion potential to a range of miniatures I previously would never have considered due to being easy to cut, carve and clean compared to metal.

While in store, I was given a look at a range of the new Citadel Finecast kits, large and small, and I have to say - I was very impressed with what I saw. The details were crisp and sharp, there was little flash and what there was is easily removed and the figures were very light and resilient (Steve the manager dropped a LOTR elf with bow from about 2 feet onto the table and it simply bounced - the bow, which was very thin, didn't even bend or break).

Best of all, because the material is so light, large kits which were once a pain to assemble when cast in metal (such as the Nurgle Demon Prince and Shaggoth) are now extremely light and easy to put together. So much so that you could simply glue all the parts without pinning (though I probably still would just to be 100% cautious).

Anyway, as I mentioned, I decided to pick up one of the new Finecast figures to do some experimenting on. In the end I settled on the Dark Eldar Archon. 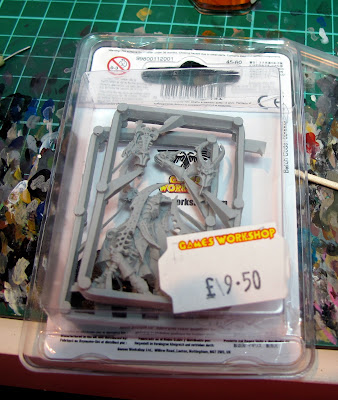 The first thing I will say is that I was impressed by the relative lack of flash on the sprues for the figure. Earlier in the week there was some serious "scare mongering" going on following a blog post on an early opening of the Grey Knight character Draigo which seemed to have a lot of excess flash and generate a lot of negative comments.

I looked at a couple of the Draigo blisters in store and a few did seem to have more flash than other kits, but I guess the advice is to look at what you are buying to make sure you get a good cast before you put your money down. I expect the casting quality to get much better now that the big push to get a worldwide release out has passed. 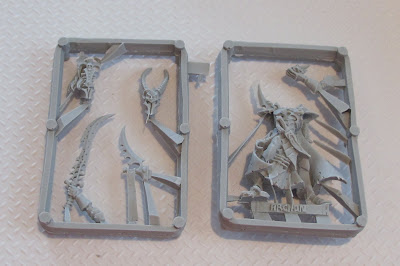 As you can see from the pics, the amount of flash on this particular figure is insignificant - a couple of thin filmy bits but nothing a quick trim wouldn't easily remove and certainly much quicker to clean than metal flash.

This figure comes on two small sprues, one for the body and right arm and one for the head options, shoulder spike and weapon arm. 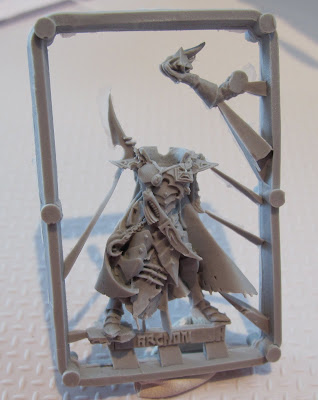 The detail on both sprues has come out perfectly - no evidence of tearing, warping or air bubbles/detail not filling. The mould lines are also very small which is always welcome. I had seen some people commenting on forums that the Finecast range requires more vents to be cut in the mould, meaning more contact points for flash which would obscure details. 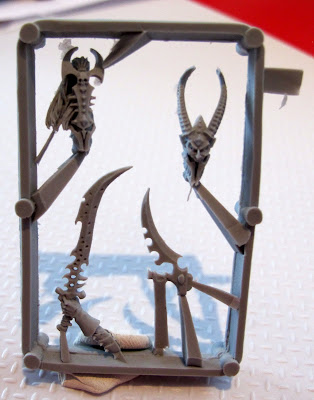 Honestly, on this model I don't see what all the panic was about. The flash is no more than was ever present on a metal model (excluding the spure of course) and the contact points between sprue and figure are very small and do not meet at any detail points.

Like all models, whether metal, resin or plastic, I think I will still be sanding most surfaces to get as smooth a finish as possible, but for the casual painter and those who game, I really think the Finecast range will be welcomed as an improvement over metal miniatures.

I know that personally, I am really looking forward to being able to use some new and existing sculpts for conversions and have already been eyeing up the current Citadel Finecast releases, identifying models with interesting "new" conversion potential!

Feel free to leave your own thoughts in the comments.
Posted by CMDante at 15:42