As anyone who is a regular at Games Workshop events and is a fan of Forgeworld miniatures will know, GW's resin specialists have, for the past few years now, released special "event only" miniatures on an annual basis.

While I have yet to attend a GW event this year, I did manage to pick up one of the many event only models available on eBay. While you may find that you have to over-pay to pick one up, I got mine for £18 including postage - not too bad when you consider the model costs £12 new at an event (which would also have associated costs in attending).


The first thing of note about this years event only models are that they come in a new packaging format for Forgeworld. It seems that the new Finecast style plastic blisters are also being used to package these figures. I'm not sure if this is something that is being rolled out across the Forgeworld range, but it is a bit of a welcome change. 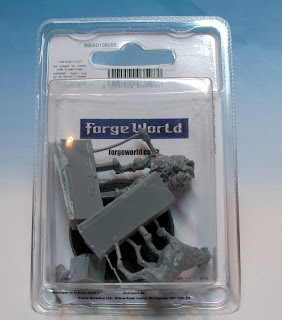 Previously Forgeworld models came packaged in small jiffy bags - great for seeing the parts through because you could carefully manipulate the parts to see them from all sides, but they didn't offer any protection from breakages while transporting/storing. Not great for the often fragile, brittle parts typical of resin kits.

I knew the minute I saw the first pictures released of the Imperial Enforcer model that I would wind up purchasing one and on doing so, I was not disappointed. I have always had a preference for Imperial figures and a great fondness for anything related to Necromunda/Inquisitor - models that have a strong character in their own right without a supporting army. This guy definitely ticks that box. 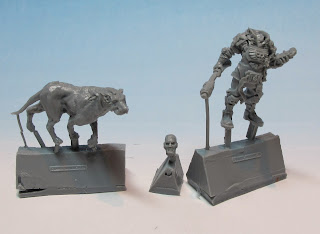 The model consists of 3 pieces. The enforcers body, head and a cyber mastiff.

As with most of Forgeworld's products, the sculpting quality on both miniatures in this set is top notch, full of crisp, intricate details. The enforcer's body has a number of small imperial icons and some finely detailed chain elements, including a pair of handcuffs. 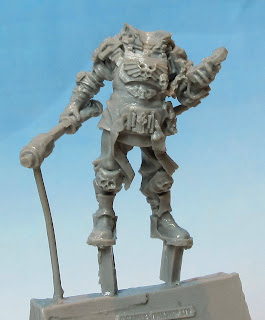 I can't say I'm a big fan of the way the boots have been designed. The soles/heels look too tacked on to the rest of the boot, almost like an after-thought modification to "space" them up to look more 40k. A minor criticism though. 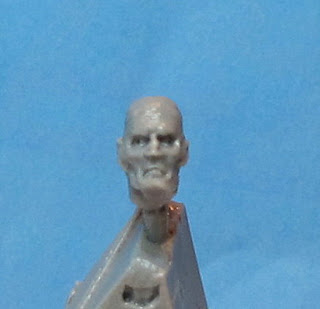 The head has a sullen eyed veteran appearance - a somewhat common trait of Forgeworld bare human heads. It actually reminds me a lot of Inquisitor Eisenhorn too and would be an ideal choice of head for such a conversion. 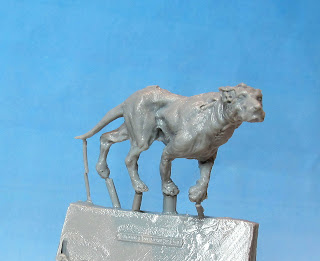 Finally, the cyber mastiff is a large, but exquisitely sculpted beast. The anatomy is very realistic looking, even for a cybernetically modified, gene-enhanced dog! The face is a pleasant change from the usual aggressive snarling that is common for most wargames miniature beasts and hounds. There is also some really nice detail for the cybernetic enhancements.

The posing of the model is more relaxed than the typical 40k miniature posing offered in GW's main ranges, yet still interesting and characterful. He has a sort of "investigative stride" look, with shock maul held low in his right hand and some sort of auspex/communicator device in his right. 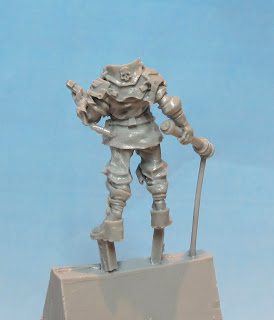 The cyber mastiff's pose has a similar feel, as though master and beast are investigating some sort of incident. He also has a nice loping, single minded stride going on. 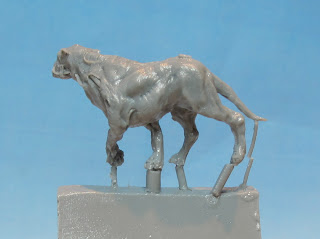 This kit instantly ranks amongst the best quality of casting I have seen from Forgeworld. A few small mold lines, bits of flash and sprue vents, but nothing you wouldn't expect on any miniature. The details have all been cast fully and crisply, with no softening of detail that can sometimes be present in resin kits and which used to be a common issue with some Forgeworld kits in the past. 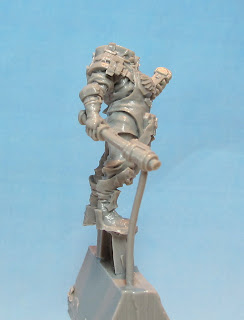 The worst area for mold lines appears to be the tops of the boots on the enforcer's body. This seems to be quite a common location for deep inset mold lines (as opposed to raised mold lines common on plastic kits), but nothing a little putty and sanding can't sort. 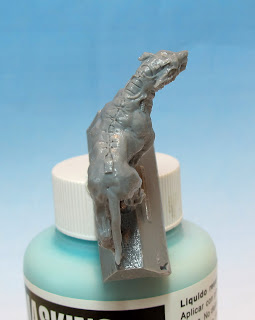 One thing I would say is that the miniatures feel very greasy all over, clearly having a goo coating of mold lubrication, meaning they will need a good wash and light scrub in some warm soapy water - something worth doing to all miniatures before applying paint, but particularly important on resin models.


Overall, this is a great kit. The models are nicely posed, work well together and are finely detailed and cast. As a personal opinion, there aren't enough of these "non-battlefield" miniatures that flesh out the background of the game and are a common focus of Black Library novels, making this a welcome addition to the GW range.

The only real criticism I have is the previously mentioned styling of the boots. A small criticism though of an otherwise brilliant kit.

If you plan on attending a GW event this year and you are a fan of both 40k and Imperial miniatures, then I strongly recommend taking the time to pick this kit up. If you don't intend to visit an event, then you could always do what I did and pick one up on eBay as there appears to always be plenty going.