Well, my best laid plans at the beginning of the year to bring a number of entries to GDUK in 2012 went out of the window by the time September rolled around and I was left with only one model to take - one that wasn't created with the intention of entering to boot!

The figure I ended up taking was a converted plastic Nurgle Lord. If I had known when I started just how saturated the fantasy single category of Golden Demons around the world have become with entries based on this figure I would probably have picked another!

Still, the base figure is an instant classic sculpt and the conversion and paint job were both enjoyable and came very naturally.

You can see the figure in its unpainted state in a previous blog post here. 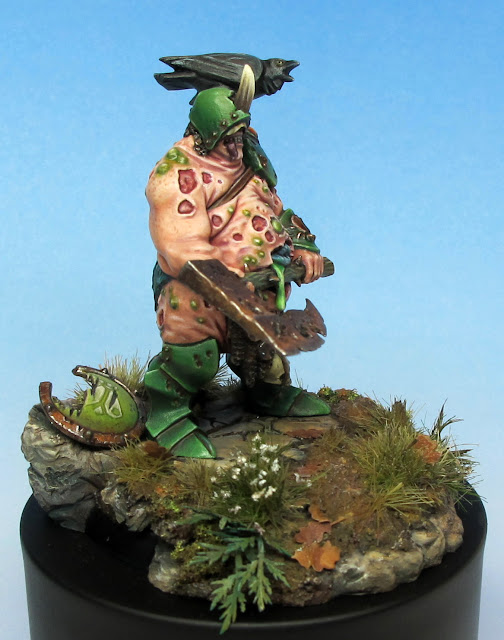 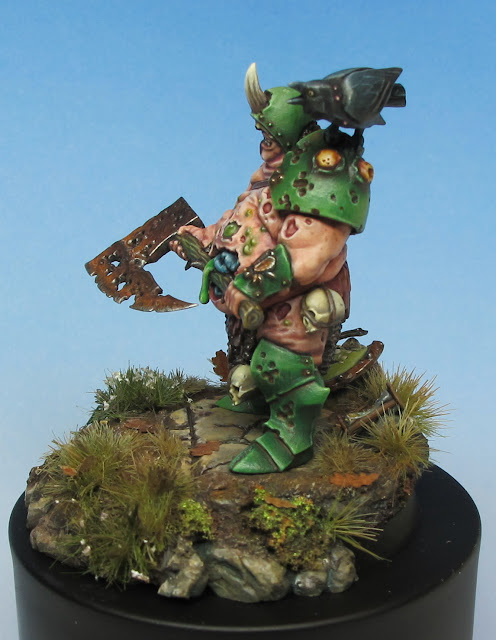 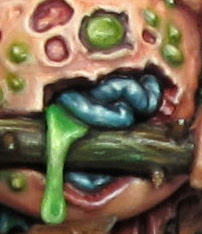 I took a lot of inspiration from the brilliant job Darren Latham (of GW Eavy Metal team fame) did on his Nurgle Lord for the paint job.

The style is a bit brighter and more sharply highlighted than my previous work - a bit of a change in painting direction to try and work more contrast in to my highlighting. While the paint job is far from perfect, I am happy enough with how it has come out.

The base was also enjoyable to make - I tried to make it blend with the plinth, overlapping the round bevelled edge of the 40mm GW base in areas to try and draw the eye into the scene a bit more. I'm in two minds as to whether the base is too big for the figure and whether he would have been more successful on a smaller base.

In the end I managed to come away with a finalist pin from what I felt was an incredibly strongly contested category. While I'm a little bummed it is my first time entering GD and not coming away with a trophy, I am still pleased enough with his performance given he hadn't been painted with the intention of entering him into the Golden Demon contest.

For those who would like to vote on CMON, he can be found here - all votes and comments are much appreciated! :)

Feel free to let me know what you think in the comments below. Do you like the new style? Is it something I should continue with? Thoughts welcome.
Posted by CMDante at 20:06