First of all, let me wish you all a Happy New Year!

2010 looks set to be another great year for our hobby, with many manufacturers lining up some great new kits. I got a look at some of the new Beastmen sprues today, as ever the quality of the casting from GW is excellent and the number of arm and head options is truly vast.

The one thing I was a little surprised and let down by though was the lack of "extra bits" on the frames. These seem to be frames aimed more at producing massed regiments as opposed to kits full of conversion possibilities.

Sadly (depending on your view-point) this seems to be a bit of an emerging trend for GW based on the recent Skaven, and the soon to be released Beastmen. Perhaps its simply due to the horde type armies that both play as?

Anyway, with the new year comes some new ideas for projects, the current one being a remake and modernisation of the legendary Dogs of War - Vespero's Vendetta.

The inspiration for this project began with the recently released Assassins Creed 2 computer game. A fantastic game, the latest installment is set in Renaissance Italy, meaning plenty of feathers, puff and slash, knee high boots etc, all the same sort of stuff we see in the styles and imagery of both the Empire and Tilea in the Warhammer Fantasy world.

Suitably inspired, I began by putting together an inspiration sheet including a collection of images of Renaissance re-enactors in duelist get-ups, some Carnivale masks and duelist weapons etc. The result was this, which is currently up on my magnetic noticeboard in my modelling room: 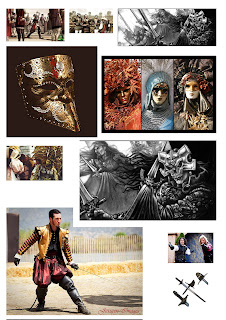 The next step was to begin cutting up parts and creating a mock up for the pose of the figure. Starting with some Catachan walking legs and Mordheim/Empire militia legs, I began creating a pose similar to the confident stride of Ezio on the cover of Assassins Creed 2: 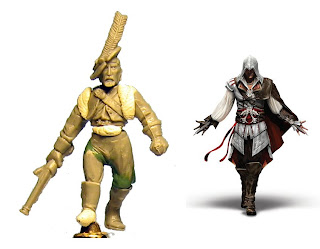 Not exactly identical, but you can see where the inspiration is coming from.

Since then, I have begun to fill things out and apply some detail to the trousers. I have also opted for a more appropriate torso that can be detailed into something more in keeping with the Renaissance duelist look. 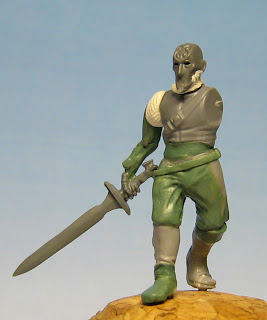 The head in the image above, from the Empire mage kit, works quite well for what I am after, however I want to keep my options open for the final design so I have also sculpted a head which I will be having cast so that I can sculpt a variety of mask designs. 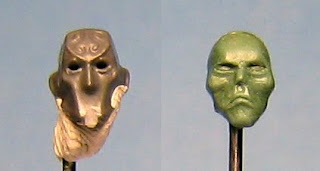 Obviously this is all very early days yet and the WIP nature means that things will no doubt change in the coming weeks, but hopefully it is clear so far where I'm going. The plan is to produce a small unit of 5, all characters in their own right, but tied together by a common direction and posing.